skip to main | skip to sidebar

Fifth in a series of tanker helmet posts "Sadder but wiser"
That's  a phrase that characterizes the early purchases of many helmet collectors. I think all of us, in our ignorance and lack of experience, coupled with our enthusiasm, have bought a helmet that was misrepresented by the dealer.

The subject of this post represents one of a few of those instances on my part.

Back in 1989 I was very happy to pick up this "American" tankers helmet, ca. Korean War.  At least that's how the dealer pitched it to me.  The price was right and I paid cash, feeling good about the purchase.

As soon as I got it home and took a good long look at it I became uneasy.  I was starting to have some doubts.

Although very similar to the WWII American G.I. tanker lid, there were things about this one that just didn't match up.

It wasn't until I purchased Paolo Marzetti's "Combat Helmets of the World" (1996) several years later that I finally got a positive ID. There it is on page 120, figure 32.105; "Bundeswehr tankman's helmet U.S. A.C.H. type"

Oh well, live and learn. I still don't have an American tanker's helmet of the WWII era, but I did pick up, for $25.00 a pretty okay West German version. So all's well that ends well I guess.

Here then, in all of its copycat splendor, The Bundeswehr tanker's helmet of the post WWII era. Front view, note the lack of the "horns" found on the U.S. version. The straps that secure the headphones are also unique to this German number. Top view demonstrates far fewer, and different placement of  ventilation holes than with the U.S. lid.  Marzetti notes that earlier versions of this German helmet had an aluminum bowl while later ones (as this one) had bowls made of fiber. There are no maker's marks of any sort.  A (missing) rubber disc fits in the very crown of the helmet to provide additional cushion for the wearer. The is the only stamped marking of any sort in this lid denotes the size, the only other is in chalk... and is just as mysterious in meaning. Foam rubber, long since rotted away, was cemented on the headphone earpiece flaps, both for comfort as well as acoustic insulation. A close up of the elasticized straps that snap into place to secure the headphones, also a view of how brittle much of the leather has become. That little metal bracket was, I believe, part of the suspension for a boom microphone. Despite my initial buyer's remorse and a few years of trying to puzzle this one out, it remains a very nice specimen.  A mute testimonial of a West Germany that was quickly getting back on its feet economically and militarily following the devastation of the Second World War.  I'm happy to have gotten this helmet at such a reasonable price.  And although I'm grateful to have acquired it...

here's looking toward the day when an affordable U.S. WWII tanker lid comes my way: Until then, happy, and informed, collecting to us all.
Mannie

Next Monday, another tanker helmet installment.
Posted by Mannie Gentile at 10:39 AM

The "62" is a standard Bundeswehr size stamp

Seems I can always rely upon you for the insider's view.

Thanks alot and best wishes.

Some years ago I bought a similar lid at a UK militaria show, where I was told it was a USA tank lid. I paid more than $25 for it but it was totally mint and unissued. The "67" chalked inside is a typical German calligraphy type and should have set the alarm ringing with me. No matter, at least we possess a slice of beautiful history. 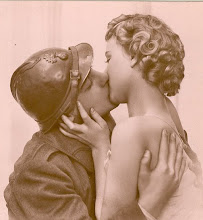 FULL INDEX OF HELMETS AT BOTTOM OF PAGE

Mannie Gentile
I'm fortunate to have married the love of my life. In that, I am a very lucky fellow. Otherwise I live in Washington County in western Maryland in a little house on the shoulder of South Mountain. Other stuff from me here: http://manniesartimitateslife.blogspot.com/